There are plane trees lining the streets of the Trestle Glen neighborhood in Oakland, California. They are tall and gray with thick flaking bark and large bulbous branches. They grow broad palmy leaves that wave like sage-colored napkins tacked to a telephone pole. I first passed them a year ago this month, when I moved my life to California. My new roommate and I were walking back from Chipotle, winding over streets and sidewalks that were not yet charted in my mis-compassed mental map. The trees lined the streets on both sides of us, reaching gently toward the sky and leading the way to our condo.

These are the plane trees in Cannes, a little different from the ones in Trestle Glen, but still very similar.

I didn’t really notice the plane trees, though, until later that fall. You cannot miss them in the fall, after they have dropped their beautiful leaves and stand there tall and naked with long empty arms. In that solemn state of starkness they set a flash off in my brain, sending me back to the week I spent in Cannes and the sidewalks lined with plane trees. They reminded me also of the entire three months that I wished and waited for spring to come both to France and to my life. I had never seen plane trees in fullness. Had only ever seen them empty. I did not even recognize the Trestle Glen plane trees until all of their life was stripped bare. And by the time that it was, mine had been too.

Starting last fall and going deep into winter, I wrote several posts on the topic of grief and mourning. It is always risky to write about something like grief as you are living through it, tall and naked with long empty arms. It is difficult to discern when you are being too vulnerable, too needy, too bulbous and large without anything hopeful to offer. But there is something deeply good about it as well. Something raw and true and relatable that comes from writing about pain while you are in it. And there is something equally good about re-reading those moments and realizing that they have passed. 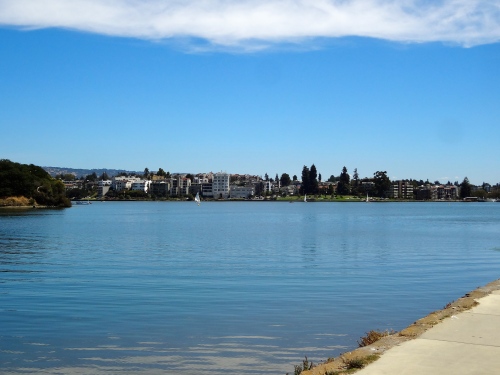 I used to run by the plane trees on my way back from Lake Merritt. They were the sign that I was almost home, the crowd along my sidelines. I ran from August until December and then at some point I stopped. It wasn’t because of the winter weather (it doesn’t really get that cold in the Bay Area). It was the winter in my heart. The empty abandoned places that would not seem to mend, the affection I was aching to offer, the rejection I couldn’t understand.

I began going to a new church sometime mid-February. At the end of most services I found myself kneeling on red carpet squares, hunched over in a fetal position, tears spilling from my eyes and into cupped hands. I wondered why I never brought tissues. I wondered why I continued wearing mascara. I wondered if the day would come that I wouldn’t cry during church. But those tears were the healing of my heart, the manifestation of all my unanswered questions and unfulfilled desires. They stung with anger and regret and confusion and fear. And I continued to pour them out week after week, letting them sink into the carpet that had been laid before the altar.

There is a reason that there are so many songs about teardrops and poems about rain. A reason we cry in darkness. A reason we hope for light. 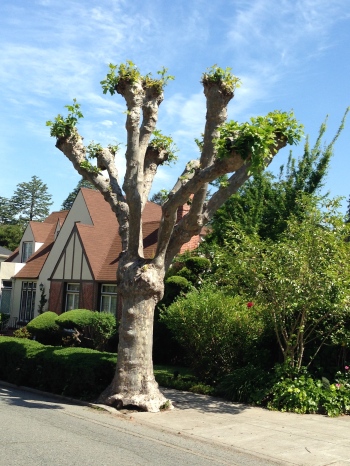 It was April or May when I first laughed in the middle of a sermon.* Not just giggled or chuckled, but full out guffawed in this loud sonorous echoing way that suggested I had no control over the sounds coming from my body. I didn’t laugh so hard that I cried, but I did almost cry when I realized how long it had been since I’d laughed like that. Laughed in such a way that it shifted something in my heart, cracking an impenetrable shell, letting just a little life break through. Later that week I went running around Lake Merritt and on my way home I noticed the plane trees. They were still naked and tall, but they’d been augmented in life. Sprouted little tufts of green that looked like leafy toupees.

It is difficult to know where you are when you are in the midst of grieving, in that stillness of a winter that won’t end. There were times I was sure I was ready to move on. Times I wanted to will myself to wholeness. And many, many times when others wanted this for me, to the point that it hurt me to tell them any different. But you cannot will someone out of grief anymore than you can will a plant to blossom or the seasons to change. You do not wake up one morning knowing it is spring, but you do see signs that it is coming and one day you recognize that it is here. 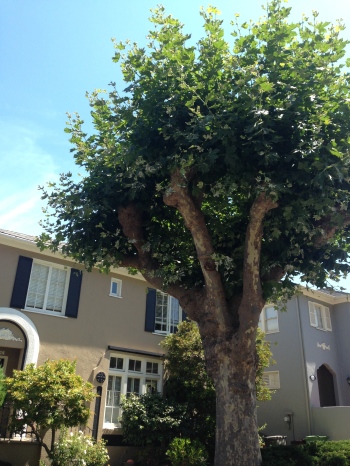 I was talking to one of my friends on the phone last weekend for the first time in quite a while. “So, do you think that you’re over this?” he asked, and I paused to really think about it. It’s hard to say when you’ve completely finished  the process of grieving, when your heart is done mending, when your life is back to normal. I’m not sure that I’ll ever feel life is “normal” again, and for the most part I’m okay with that. I know it will never be the same and in many ways it shouldn’t be. There are things I thought would be different. Healing and restoration that didn’t happen the way I’d hoped they would. I hesitate to say that I ever “get over” any sort of experience. I believe those are the very things that make us who we are, and so I do not expect to let them go like an old pair of shoes.

But when I look at the trees that line the Trestle Glen sidewalks and I see their big leafy fullness, the shade that they offer and the strength with which they stand, I think that actually I feel quite like those trees. I feel slippery sap running through my veins and nurturing the growth that is coming from my inside of me. I see the evidence of life, the leaves of friendship and fruits of creativity. I see that spring has come. I see that winter is past.

(Those of you who have followed this blog since last fall might feel that this post has been a long time coming, and you are right. I find that once you are on the other side of pain or grief or sickness or despair, that the urgency to share about it often diminishes significantly. Still, I am compelled apologize for not posting this sooner. Then again, I’m not sure it was possible).*It was an appropriate point to laugh in the sermon, in case you were curious. Our head teaching pastor is very good that way.