I have been watching Star Trek: The Next Generation for something like six weeks now. My favorite character is Data (played by Brent Spiner). I thought that this might be the case just a few episodes into the series. Now safely through the second season, I am convinced of it. Lieutenant Commander Data is a Soong Type Android, a synthetic life form made to function like a human, but with superhuman qualities of strength and computation. I regularly chat about Data with a friend back in the Midwest. He asks me why I am so drawn to the character and I tell him I am not sure. I think it is because I identify with Data’s curiosity and nuanced sensitivity, because I appreciate the novel wonder that comes from simple discoveries in human behavior, because I find his fascination with humanity so fascinating myself, because I—much like Data—am also on a quest to know and understand what it means to be human. Come to think of it, so is my friend back in Kansas City, maybe we are both more like Data than we realized. 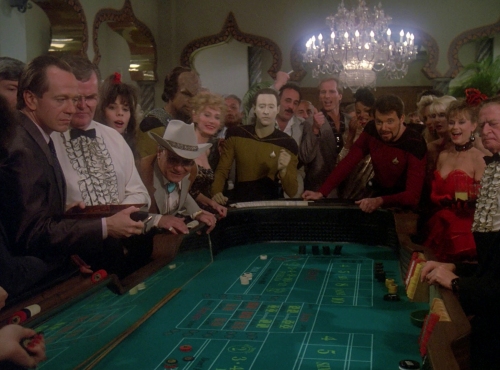 I have also come to appreciate the humor that surrounds so many of Data’s scenes and situations, as well as his fascination with Sherlock Holmes and the absurdity of seeing him roll craps in the Hotel Royale. I was not surprised to learn that when Star Trek was airing, most of Brent Spiner’s fan mail came from women and was directed to Data rather than Spiner himself.

“What does it mean that I have a celebrity crush on an android?” I asked one of my new Trekkie friends the other week.

“That your heart is bigger than humankind” she responded.

It was a nice thought and something that I believe has as much to do with The Next Generation as it does to do with me. I cannot speak for the other Star Trek series (as I have not yet watched them), but one of the key values in TNG is the appreciation and preservation of life in all its various forms. The mission of the voyagers on the starship Enterprise is “to explore strange new worlds, to seek out new life and new civilizations…” That life is appreciated and respected, even when it is different, even when it is dangerous, even when it makes members of the Enterprise uncomfortable or puts them at risk.

That is at the heart of the way that I have come to view the world as well. It is the reason I seek out and establish connection. Everywhere. I sometimes feel that I walk through the day, taking in sensory data and probing for connection, both among others and also with them. I watch a Latino mother at Starbucks order five tall dulce de leche frappuccinos with extra caramel for herself and the four round-faced children with their missing teeth and their dark brown eyes. I see a woman in Trader Joe’s singing to the toddler that she balances on her hip as she reaches for a jar of unsalted creamy peanut butter. I overhear the man in line at Target who is buying a My Sweet Love interactive baby doll and a great big Disney Princess bag, evidently on his way to a birthday party. I watch a man shuffling under the overpass, his feet covered in paper bags, his hands full of plastic sacks, a vacant look on his dusty brown face.

I am an observer of life and a participant in it, perhaps more fully than I have ever been before. My heart is tender in a way that I’m not sure I’ve ever experienced. It warms when a little girl named Lila comes to interrupt my cribbage game. It flutters when the man at the library makes small talk as he’s stamping due dates on my interlibrary loan books. It stifles when I come across an email from someone who never apologized. It breaks open as a friend at church tells me that the cancer has returned for a young man in our community.

It is the human experience, and it is insatiably fascinating. Sometimes it is so beautiful that it hurts. Sometimes it is so precious that I cry. Sometimes it is so piercing and painful that I choose to stay home rather than walking the world with my heart all opened and exposed. Even as an outside observer, I think Data might understand this. At the very least it would be of interest, something we could sit down and discuss as we stare into space and sip drinks in Ten Forward.

Some nights I stay home with Data and his fellow voyagers. Some nights I do not go out with friends or read essays. Some nights I let Star Trek tell the stories for me. And in that I gain the courage to continue making connections, to find my own way of boldly going where none have gone before.