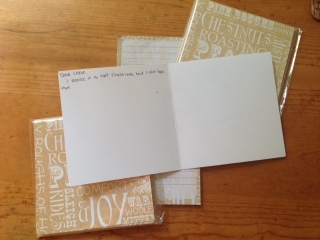 The other night I was emptying out my school bag, looking for some misplaced paperwork before sitting down to watch a movie. Among the avalanche of notepads, sunglasses, gum packets and grocery receipts, out fell a packet of Christmas cards—one of six that I purchased back in November, back when I still hoped that among other things I would write Christmas letters by the middle of December. I’d taken them to school and church, packed them in my carry on luggage and left them scattered about my parents’ house for the entirety of Christmas break. I took them to Kansas City and pulled them out while my family watched Christmas movies and decorated cookies. I finished writing in four or five, but most were still blank by the start of the New Year.

I flew them to California with me. I did a couple my first day back in Oakland, but then I got caught up in other things, most of which were not actually more important, but all of which were easier than setting aside the time to write something thoughtful and personal, even to people whose friendship I valued. “I’ll do them later,” I reasoned. “When I have more time, when I’m not so distracted, when I can really enjoy the process of putting down words.” The problem with this reasoning is that I never have “more time,” I’m always distracted, and I rarely feel like there isn’t something else I ought to be doing. “Later” doesn’t have an expiration date. And Christmas cards do. Don’t they?

Among other things, I spent a large portion of January waiting to hear from people who had promised to get back to me, people whose words could have soothed the ache in my heart. An e-mail might have sufficed. A phone call would have been better, more personal. But anything would have helped. I have this terrible habit of believing people when they say they’ll get back to me, when they promise to respond.

The other weekend I was visiting my godmother and she told me a story about a guy she dated in college, someone she thought she would marry. Over spring break he went on a road trip with some buddies and they got in a car accident. She isn’t sure exactly what happened, but the guy she’d been dating moved back home to his family and didn’t return to school. Though they’d been together for a while, he didn’t call, didn’t write. She was left to make her own assumptions, to make sense of the matter and move on with her life. Fifteen years later he sent her a letter apologizing for the way he had treated her, for the pain that must have caused and the questions that were never answered.

I have hoped for something similar. I’ve sent letters and e-mails apologizing for the past and trying to make sense of brokenness. I have longed for a response, tried to force an understanding. I think maybe the other person meant to get back to me, but good intentions mean next to nothing when you don’t follow through. Sometimes they just make it worse. And yet there’s still something in the back of my heart–the corner I’ve been trying to avoid feeling–that wonders every once in a while if the e-mail will come. If he’ll realize that later really is better than never.

A few weeks ago I got a voicemail from a college friend. We hadn’t spoken for years (at least two, maybe three). She was one of those friends that I kept in my phone but wasn’t really sure I’d ever talk to again. I didn’t go to her wedding. I didn’t know her new last name. I wasn’t sure where she was working or living. But she’d seen a link on Facebook that led her to my blog. She read it and thought of me and a class we’d taken together our junior year of college. She remembered the day she came to my dorm room and we had tea and talked about life and hurt and the boys that didn’t love us anymore. She said she missed writing. She missed talking with me. She wondered if we could catch up. I called her while I was cleaning my bathroom and she was driving home from work. We talked for almost an hour, up until she ran into a snowbank and needed to get off the phone. We promised to catch up again soon. I think we really will. She sent me a text message last night.

We lead busy lives. Too busy in my opinion. And in all of our busyness we sometimes forget each other. And when we forget, we’re ashamed to admit it. We’d rather say it didn’t matter, decide that we’re not the kind of person who sends birthday cards or brings housewarming gifts, than admit that we failed, that we forgot. I know I do it. All the time.

I could communicate through phone calls, post cards, text messages, Facebook, snail mail, e-cards, Skype, Twitter, Google chat, Instagram, e-mail, photo messages, or voice mail. And yet the more forms of communication I have, the less I seem to care. I forget about birthdays. I have to schedule coffee dates in my iPhone. I sometimes fail to send cards, buy gifts or show up on time. But I have decided that when I think about it, when I realize or remember that I promised I’d come, that I said I’d respond, that I wanted to be there, I’m going to do something about it. Even if it is late. Because people should be treated as human beings to be cared for, not as tasks to be attended or chores to ignore.

My Christmas turned Epiphany turned Valentine’s Day cards may not make it out until Easter, but I’ve decided I won’t let that keep me from sending them. I don’t want to be the kind of person whose pride gets in the way of her humanity. Ideally I’ll improve my organizational skills. I’ll be more attentive to my friends and less focused on my work. Ideally I won’t forget. I’ll be on time, maybe even early. But for now I am often behind. For now I am sometimes late. But inside of me, in the place that welcomes unsent letters and two-year-old Christmas gifts, unspoken apologies and unoffered forgiveness, I really believe that it’s never too late.

One thought on “Never Too Late”