I have this thing with restoration. With taking something that is about to be discarded–a wilting bag of spinach, a faded polka dot skirt, an abandoned coffee table sitting on the sidewalk wet with rain–and giving it new life. I mentioned this to my mom on the phone the other day. I was driving around Oakland while she was cleaning her kitchen cabinets. I just don’t like giving up on things, I told her–projects, ideas, essays, even blog posts. Sometimes I set them aside with the intention of coming back later, but I don’t like to abandon them, essentially saying, “It was great while it lasted, but you’re just not worth the effort it would take for this to work.” 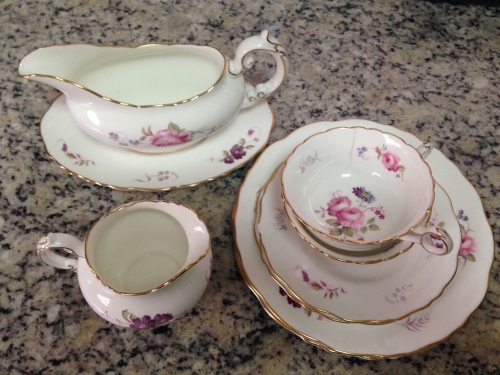 Purchased for $2 from a tea shop that was going out of business. They are cracked, but beautiful. They deserve to keep living.

I imagine my rough drafts in the bottom of my desk drawer, sitting beside a broken picture frame and the shelf I made in shop class wondering if they will ever again see the light of day, if I will actually come back to them and begin the painstaking process of revision, which is in many ways much harder than the chaos of creation. I mean to. I really do. I can’t bear to delete a patchy essay any more than I can throw out a half-read novel or a handle-less coffee mug. 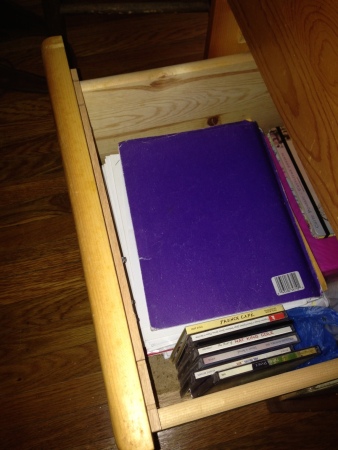 A desk drawer of stories.

I don’t do so well with giving up on things and I sometimes wonder if that’s a blessing or a weakness.

Early this spring I listened to a Christian teaching on the topic of restoration. The speaker discussed the story of the apostle Peter, a strong headed fisherman who kept camp with Jesus for some three years. Peter is committed, passionate, dedicated. He is a good and faithful friend right up to the day of Jesus’ death, the day Peter publicly denies having ever known his best friend. He does this not once, but three times, exactly as Jesus predicted he would. Exactly as Peter had promised he wouldn’t. After the third time, Peter sees the face of his friend as Jesus is led off to his death. He is ravaged by his action, by his selfish fear and lack of fidelity.

Three days after the crucifixion, Jesus rises from the dead. He sees Peter, and instructs him to go and tell their other friends. There is a group encounter, which I can only imagine was terrifying, confusing and joyful all at once. Then Jesus is gone. Sometime later, he shows up along the Sea of Tiberias, where Peter and his friends have been fishing all night. It is early morning and Jesus (unrecognized) calls to them from the shore, asking if they’ve caught anything and suggesting they drop their nets once more. They do, and amazingly they catch a whole bunch of fish. In a flash of panic and excitement Peter realizes that the man on the shore must be Jesus, who is prone to making amazing things happen. Peter throws on a tunic and dives into the water, swimming to the feet of the man who had died. Peter must have been eager and nervous, the way you are when you find yourself in the presence of someone you have both loved severely and wounded deeply. The others arrive by boat and Peter helps them drag a net of flopping fish to a steaming bed of hot coals, where Jesus breaks bread and feeds them.

After they have eaten, Jesus turns to Peter in their first one-on-one since the night before he died. “Peter,” he says, “do you love me more than these?” Peter’s heart pounds, “Yes,” he replies, “You know that I love you.” Jesus asks the question a second time, as if to make sure. Then a third, a repetition that both hurts and heals. In his inquisition, Jesus allows Peter to make right what had gone wrong between them. He had not given up on his friend. Had not ended their story. Jesus redeemed. He restored.

It is a very different matter to talk about essay drafts and human relationships. About redeeming the outline of a novel or making right a relationship that has been damaged. And then it’s really not. For what are we if not the stories we tell? The stories we live into every day of our lives. And what are relationships if not stories we tell alongside others? Stories that we craft together with friends and brothers and parents and roommates as we learn to make sense of living and loving and all that entails.

It is in my nature to rework my writing and reclaim lost objects. But it is a much harder task to practice the forgiveness that leads to human restoration. To give up my right for vengeance, my right to express how deeply I’ve been wounded, and allow myself instead to trust.

These are essay drafts. Sometimes they need an awful lot of work if they are ever going to make it. And sometimes they are worth it.

I have been on both sides of the forgiveness equation. I think all of us have. It is easier to become bitter, especially when we feel devalued. It is easier to close ourselves off. It is easier to ignore, to throw out a relationship like an old pair of shoes or let it sit in the bottom of our hearts next to all of our other unfinished stories. Sometimes that is what it takes.

But there is always a greater choice. An opportunity to make things right. An ability to give a grace that is far more powerful and miraculous than a netful of fish. When we are willing to redeem, when we are able to restore, it is then that we write the stories that the world needs to hear.