Five years, eight months, and six days ago, I came to San Francisco as a tag along on someone else’s journey—someone who was following a dream he’d been nursing for years and whose life was pulling him out to California. While he was interviewing for a future, I took the keys to the car and headed toward the ocean with no real idea of how far it was or how long it would take to get there. I was two years away from owning a smart phone and thus had no map of where I was going. I wasn’t totally sure if I’d reach my destination, but I generally knew where I wanted to end up. That’s sort of the way that I function by default. 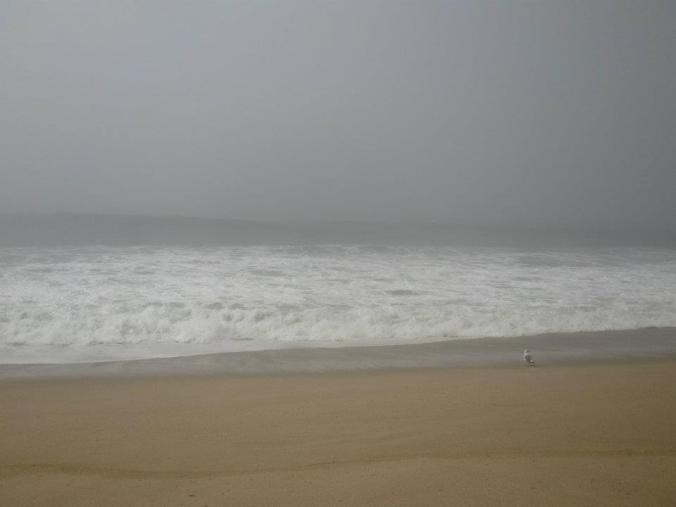 There was this rush, this absolute elation of driving through the hills in search of the water, which was shrouded in fog by the time that I reached it. Still, it was the ocean—the one place in the world where I have always felt welcome.

One year, eleven months, and two days later, I moved to the Bay Area myself, not as a co-pilot but a driver, a dreamer on a quest for my own aspirations. My first free day, I grabbed the keys to my car and drove out toward the ocean, not totally sure of the route I was taking, but with a general idea of where I wanted to end up: immersed in the cold wild waves of the Pacific.

My life in the Bay has been much like that first trip—shrouded in a cloud of unknowing, stopped at a general destination where I’ve come and stayed, not always sure why.

Back on that first trip, (the one on which I was a side-kick), there was an evening in San Francisco and a walk along Fisherman’s Wharf. I remember watching the runners move up and down the Embarcadero and thinking how fantastic it must be to run beside water. I was more of a runner myself at the time and yearned to take my turn pounding that thin stretch of pavement. And yet, despite the hundreds of visits I’ve made to the city since, I’ve never been on the pier in tennis shoes. Not until last Friday, when a media trip left me downtown overnight with a sunny morning and an open invitation to finally run the Embarcadero.

As I left my hotel room and jogged up to the Ferry Building—a building I still look for every time I surface from BART (the subway of the Bay)—I thought of that first visit and of how little I knew at the time: about life, about myself, about the city in which I stood. I did not know, for example, that the Embarcadero leads up to the Wharf, which opens to Ghirardelli, which is connected to the Marina (by way of Fort Mason), which leads to the Presidio and the Golden Gate Bridge. I had never heard of BART or the Bay Trail or the Barbary Coast, had never hopped on muni or tried to navigate buses, much less called a Lyft from an app on a phone. San Francisco did not seem, at the time, connected as it is. It seemed big and busy and daunting, not the 7×7 square that I know it to be.

I have spent the bulk of the past four years trying to master the routes, learning to navigate my way along freeways and side streets, through grad school and essays, applications and submissions, job interviews, internships, relationships and communities. I have found short-cuts to connection and been halted by traffic. Sometimes it is thrilling. Other times, exhausting. I have become well-acquainted with the airports that lead me back to familiar places where there is infinite parking, $2 coffee, and unconditional love from people who have time to spare. But I always return to this city.

I drive out to the ocean, where sometimes it is sunny and sometimes it is epic and sometimes it just is. And this always reassures me that this is where I should be. This is the place where my road has led, though I do not always know why. I have stopped at this general destination and chosen to stay.

Next month I will be learning another new route—the traffic-filled kind from Oakland to Mountain View, which I may make by car but more likely will make by way of the shuttle that Google will send to fetch me. It will bring me to a campus where I will work on a team, as a writer at one of the top five tech companies in the world.

I cannot tell you how strange and exciting this seems. Because the Amanda who drove out to that fog-shrouded shore back in 2011 would never have guessed that she’d come to this crossroads. She would have been so much more likely to vie for desk space at Hallmark or an office on a college campus than to write about augmented reality or listen to tech podcasts. But that is the person that she has become and for now this is what she is doing, running this trail and coming to peace with the fact that she may never really know where she is going.

I catch myself off guard and realize that, actually, this is something I want—to still be surprised by the unfolding of my own life, like the spray of the ocean when I turn from the waves or the bend in the trail as it winds round a hill. There is a peace that comes with accepting the veil, knowing that somewhere out there, there is ocean.

3 thoughts on “Somewhere out there, there is Ocean”