By Monday, I had dug myself into a metaphoric hole so dark and so deep that I did not even panic at the thought that I might never get out. I did not grasp at the walls or attempt to hoist myself out one homework assignment at a time. No, I cozied up to the darkness and turned on the oven.

I wasn’t hungry. I didn’t “need” to prepare food. I didn’t even need to eat to be honest. I needed to read an essay. I needed to write an essay. I needed to get through ten sources for an annotated bibliography that was due on Halloween and probably won’t happen until Thanksgiving. But instead, I pulled out the rest of the dino kale I purchased at the Farmer’s Market the weekend before and grabbed an acorn squash from the produce box on the counter. I cut the squash in two and scooped out the seeds, heated a tablespoon of butter into a frying pan on the stove, and then drizzled it over the uniform halves, covering the butter with ripples of maple syrup.

I thought about my homework, of the 15-page essay I had due the next day that I hadn’t even begun. I thought I should start it, let the words spill onto the page. But then I saw the kale wilting on the counter. I remembered how good it had been the last time I made kale, and I acknowledged how sad it would be if all that leafy green goodness went to waste. So, as the squash baked and bubbled, I rinsed out the frying pan, heated some oil and popped three cloves of garlic into the press. As the garlic sizzled, I cleaned the kale, stripping its ribs and slicing it in ribbons.

Chicken stock deglazed the pan and bubbled up around the green ribbons. I thought again that I should get to my readings, finish my essays, work like a writer. But as I opened the fridge to put back the butter, my eyes fixed on a carton of eggs. What kind of a meal is kale and squash? I wondered, grabbing a cold white egg and filling a saucepan with water.The kale as nearly finished, the squash glazed and shiny. As I dropped the egg in a swirling cyclone of vinegar water the white spread out widely, grasping for the sides of the pot. It cooked quickly, too quickly for someone who was multi-tasking. I scooped it onto a plate, alongside the steaming wet kale.

I could eat this now and wait for the squash, let it bake in the oven while prose pour forth over my keyboard. Or, I could chop up those zucchini that I saw in the crisper. They were looking mighty sad and I’d been saving them for a kitchari dish that I’d been meaning to make for weeks. It’s simple, I reasoned:  rice, mung beans, some spices, a few onions, chop a couple of carrots, and throw in the zucchini–no problem at all.

Over two hours had passed by the time I finished cooking, three if you include the time I spent cleaning up afterward. I wasn’t cooking out of necessity. I wasn’t cooking out of hunger or because someone else was depending on me for food. I wasn’t even cooking to procrastinate (well, maybe a little). Mostly I was cooking because I wanted to cook. I needed the process of creating–of chopping and slicing and rinsing and sprinkling. I need to sauté, to deglaze, to simmer, to bake. And I delighted in the way it made me feel useful, competent, someone who is capable of creating. 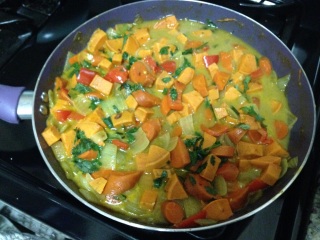 In the past couple months I’ve gained a small reputation in my writing workshop as someone who writes about food, who engages with senses and appreciates flavor. The other day one of my classmates passed along a Nieman Marcus ad featuring a turkey dinner because she thought I would appreciate the beautiful food photos (which, of course, I did). I’ve never thought of myself as any great chef. I can make a decent curry and whip up a spice cake, but me? A foodie?

What I’m coming to learn, though, is that I love food almost as much as I love writing. I love pulling it apart and dissecting how it was put together. I love consuming it in small portions, sampling different platters of various compositions. I love looking at it. I love touching it. And I love the process of creating it. I’m a slow cook, much in the way I’m a rather slow writer. I take my time making cuts and slices. I hate throwing out usable material, even if it means that better balance is achieved overall. I don’t like working on a schedule, but deadlines and expiration dates are often the only things that get me moving. There are times that my work is unabashedly brilliant–that everything comes together just right–and there are times that the components are dumped on the page, put in the oven, and left to burn. Regardless of the result, though, the process is key. 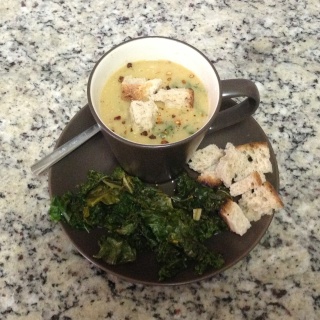 It is in the process, in the cutting and picking and cleaning and pruning, that creation takes place. If you do not enjoy the process, the product–though beautiful, delicious, profound, tear-jerking, or incredible–loses meaning. It loses the love that goes into creating, the life that comes from producing. I find the more that I write, the more I want to cook, and the more that I cook the more I want to write. The creative process is addicting. By the end of the semester I hope I strike a balance.

3 thoughts on “The Joy of Creating”